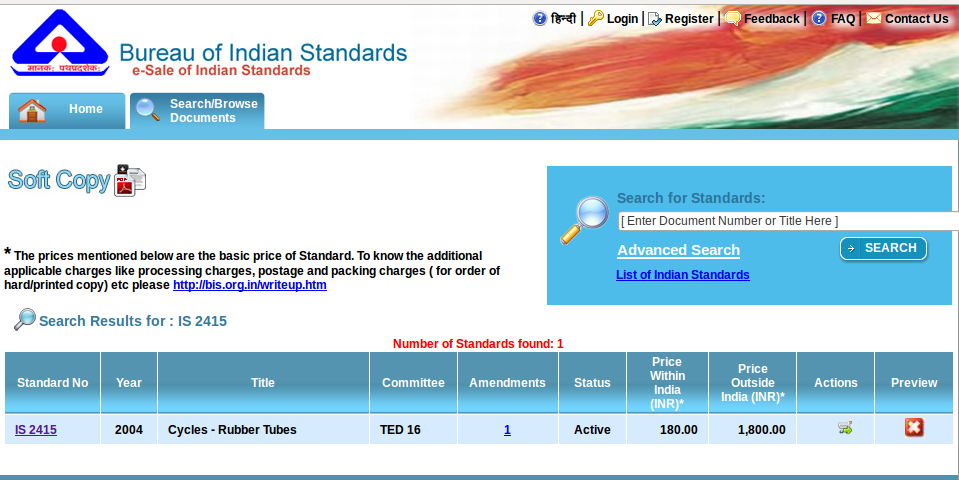 Now I wouldn’t be very surprised if this standard’s body was a private company whose main goal was profit-making. Nothing wrong with it. But this standard’s body is BSI. Bureau of Indian Standards which mostly known for ISI marking the products in India, is the national standards body which comes under GoI. Its established by Bureau of Indian Standards Act, 1986. Its public funded organization. Its main purpose is [CHAPTER IV, 10. (1) a. ]

(a) establish, publish and promote in such manner as may be prescribed the Indian Standard in relation to any article to process;

Now that sounds very illogical right? Why would you pay for something which is funded with public money. More than that why would someone put the checklists meant for public safety behind pay-wall? I could understand if they charged for hard-copy of the documents. But there is no excuse for charging for a soft copy of document. In fact it should be available freely, in readable, accessible format. Its time they do it.

But for some reason BSI wouldn’t do it. In the mean-time public.resource.org bought all those documents and made them public. All 19,200 standards documents are available in both pdf and text formats on their website for free. Public.resource.org not only makes the documents available, but also makes them accessible. They have converted about 192 documents into clean HTML and SVG, the open formats required to improve those documents. One such example is Indian Standard CYCLES—RUBBER TUBES—SPECIFICATION IS 2415 : 2004. The effort which is not just commendable but needs supports from all of us including BIS.

At least that’s what they expected when they wrote a letter letting them know about the work and thanking them. But they got this letter as response.

It’s just sad and completely wrong. I am really happy that Carl Malamud replied to this notice explaining the purpose and reasons behind making the standards document open. It’s a must read for everyone interested in Open Access.

As someone who supports open access and open data, I am very thankful to public.resource.org for making these documents openly available to all. I hope BIS becomes collaborator in this effort than antagonist. If not we have to fight this battle for open access, public safety and innovation.

Disclosure: I was one of the kick-starter backer of resources.org’s campaign called Public Safety Codes of the World: Stand Up For Safety! which wasn’t successful :(