I wore The FreeStyle Libre Sensor for two weeks in May/June 2016. This was just a fun experimental run as I don't have any Diabetes. Along with wearing the device I also kept a food dairy1. I have all the data available as CSV.

The World Health Organization (WHO) estimated that diabetes resulted in 1.5 million deaths in 2012, making it the 8th leading cause of death.2 More than 80% of diabetic deaths occur in low and middle-income countries to which I belong. So its an interesting factor look at for me. 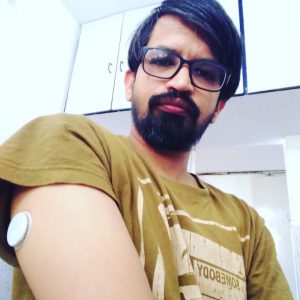 The FreeStyle Libre sensor is wearable (sticker) flash interstitial fluid glucose monitoring system. It is generally applied on to the back of the upper arm. The sensor has a thin, flexible and sterile fibre that is inserted just under the skin. Its painless, you will forget about it after couple of hours. Its waterproof and you can wear it up to 14 days. It captures a value every 15 minutes and stores them.

It's important to note that it's an interstitial fluid(ISF) glucose monitoring system. So there will be lag in ISF glucose, with respect to changes in blood glucose, is around 5-10 minutes. The claimed delay by the manufacturer of FreeStyle Libre is 5 minutes. It didn't matter to me. But if you want to track glucose levels in rapidly changing situations you might need fingerprick test.

There are two datasets. Once CGM and other is my rough food intake. You can download them as csvs. Both the sets are available under ODBL.

As per wikipedia, Ambulatory glucose profile (AGP) is an innovative methodology for interpreting a patient's daily glucose patterns. AGP provides both graphic and quantitative characterizations of diurnal glucose patterns making it possible to identify previously undetectable abnormalities in glucose metabolism. First developed by Dr. Roger Mazze, in collaboration with colleagues at the Albert Einstein College of Medicine in 1987, AGP was initially used for representation of episodic self-monitored blood glucose (SMBG). In 2001, it was successful applied by Dr. Mazze to continuous glucose monitoring (CGM). In 2013, AGP analysis was applied to flash glucose monitoring (FGM) as a means of rapidly graphing glucose exposure, variability and stability, it has been used widely in diabetes research and clinical practice.

Below you can find my Ambulatory glucose profile (AGP). Everything looks normal. 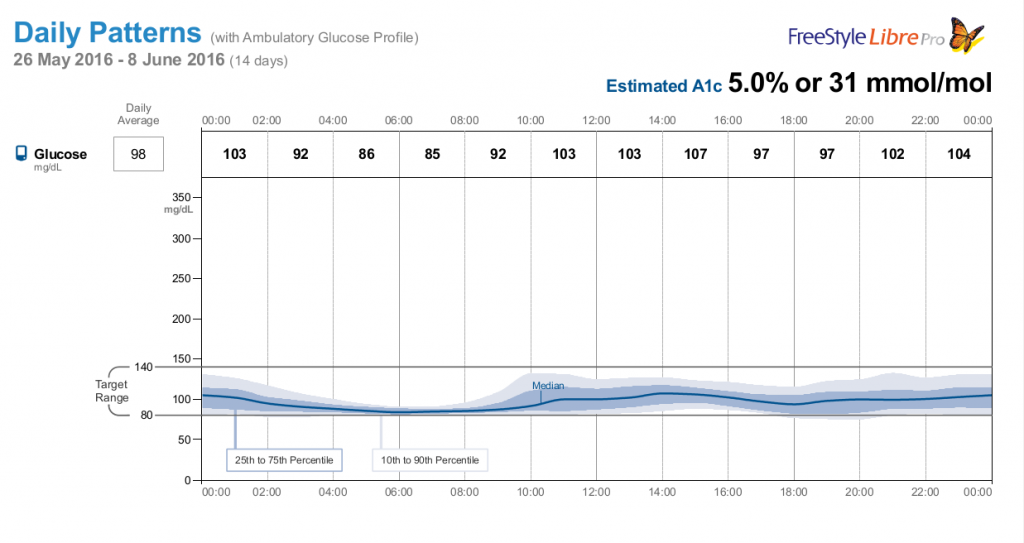 The AGP shows significant variability indicated by the darkened area on either side of the median (25th-75th percentile curves--known as inter-quartile range or IQR). As you can see its quite narrow. The lighter area on either side of the IQR represents the inter-decile range within which 80% of all values will fall (the area between 10th to 90th percentile curves). The target range is between 80-140mg/dL. 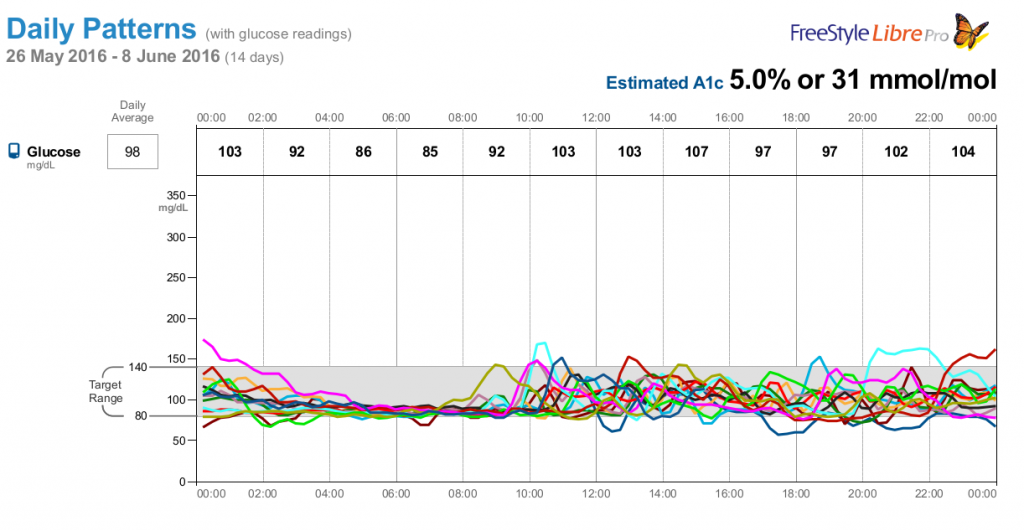 Hourly Pattern with glucose reading for every day at different time. Check late nights and early mornings, there seems to be a little rise.