This notebook is work in progress

Isn't it important to answer why question every time you want to write a how-to? :)

While exploring ESP8266, I couldn't find an easy to follow guide. Also I wanted a place to record all my learning as I explored. So this page is my lab notebook. I have tried to keep the language as simple as possible so most curious minds can understand. Simple language also helps me understand and connect easily when I come back later.

What this is not?

This is not a guide which covers all possibilities. This is a notebook where I have jotted down what I explored. So there is obviously very limited set of things explained. But since this is a record of what I followed, I know it works.

At the end I have added a section called Explore, for all those things that didn't find a place in this notebook.

The ESP8266 is a micro-controller from Chinese company Espressif that comes with built in Wi-Fi capability. ESP8266 has enough on board processing and storage capacity which makes it a self-contained IoT board. It costs anywhere in between ₹200 and ₹300.

Specifications as per manufacturer

ESP8266 has two important modes of operation. Programming mode and Boot from flash mode. Its put into a mode by powering-up GPIO pin levels, GPIO15, GPIO0, GPIO2 (MTDO is equivalent to GPIO15).

In this mode you can transfer the program from your PC to ESP8266 using serial communication. To put the ESP8266 into this mode we need to power-up the pins in a particular way.

We generally boot from built in Flash. You can power up the pins like below to boot up from Flash.

ESP8266 comes assembled on a board. Most famous ones are called ESP-XX boards. ESP-01 is easily available. You cant use it directly on a breadboard but can be connected using Dupont wires. ESP-01 has eight pins RX/TX for communication, 4 control pins - GPIO0, GPIO2, CH_PD and ReSeT. VCC and GND for the power.

The CP2102 USB to UART Bridge is required for programming the ESP8266 from a computer.

If you don't want to be worried about setting up the circuit for writing and want concentrate mostly on the development of the software then NodeMCU Developer Kit is the best. Its all in one ESP8266, Programmer and power. It can be powered using a simple USB cable. It works both with MicroPython firmware and NodeMCU firmware.

A simple usb cable. The same cable is used for both powering and programming. When I am done with programming and just want to power, I will use regular micro-usb mobile phone charger.

I use Option 1 - In production environment and I use Option 2 -for day to day development work.

esptool.py is a cute Python utility to communicate with the ROM bootloader in Espressif ESP8266. Its supposed to work on all desktop platforms, though I have tried only on Linux.To install simply download download the zipped code from GitHub or clone if you are a developer. Extract and cd into the folder. Then run help to get more info.

ESPlorer is a free and open source Integrated Development Environment (IDE) for ESP8266 developers. It needs Java 7. It works on all major desktop operating systems. I used it on Ubuntu with OpenJDK7. ITs the most useful tool that you will use on day today basis.
Just download the zipped file and run using bat file or in command line go to the folder

WebREPL client and related tools, for accessing a MicroPython REPL. It also includes webrepl_cli.py which can be used through command line. Its also useful to transfer files to ESP8266.

To run WebREPL client, download the archive and extract it. Cd to the folder.

Once you run the command. Go to the browser and access. http://localhost:9090/webrepl.html.

If you want to use CLI, then try, it will show all the options availabe.

NodeMCU - An open-source firmware and development kit that helps you to prototype your IOT product within a few Lua script lines.

NodeMCU is a Lua based firmware. NodeMCU has both firmware and SDK built into it. You can download the latest version of the firmware from GitHub, it generally has the file extension .bin. If you are in the mood of customization then go to NodeMCU custom builds, select the modules you want in your firmware and build one for yourself. Final downloaded firmware will have .bin extension.

I don't use NodeMCU/Lua firmware anymore. Corresponding section has been moved to a separate child page - NodeMCU Setup on ESP8266, mostly for archival purpose.

Micro Python is a lean and fast implementation of the Python 3 programming language that is optimised to run on a microcontroller. The Micro Python board is a small electronic circuit board that runs Micro Python on the bare metal, and gives you a low-level Python operating system that can be used to control all kinds of electronic projects.

MicroPython is a Python based firmware. MicroPython has both firmware and SDK built into it. It has small but very useful set of APIs built in. I really love Python. Its my primary language. So in the rest of the tutorial I mostly concentrate on MicroPython.

I use MicroPython Firmware/SDK + Dev Kit

The circuit is simple to build on a breadboard. 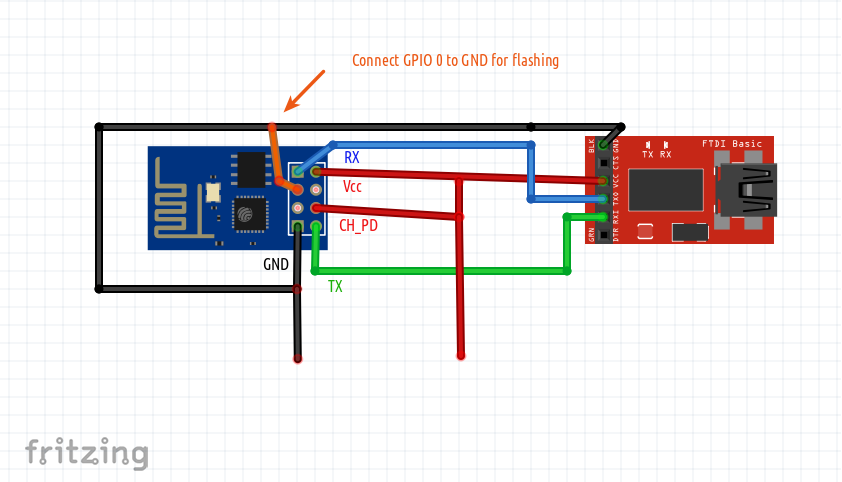 You can find the extensive documentation on MicroPython website. But I am going to list the simple steps here.

Once you have the firmware on the device you can access the REPL (Python prompt) over USB/UART0. The baudrate is 115200.

miniterm.py is a simple tool to connect to serial port. It comes along with pySerial. 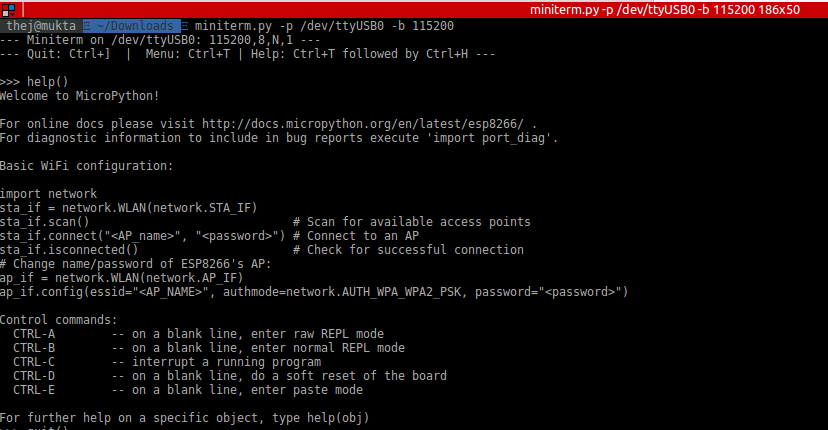 You can also use other popular tools like Putty.

Write and Run a program

Run a program on boot