Book: On the Duty of Civil Disobedience 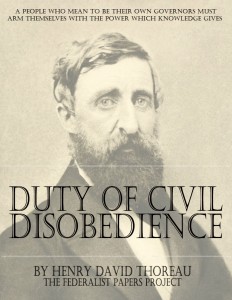 Written by American abolitionist Henry David Thoreau has inspired other Civil Disobedience leaders from across the world. The book generally speaks about the state, its influence on citizen and how citizen should resist it when it's against their conscience.

Its something that I read in one go on a flight. It's not a huge book, it's probably a booklet or a really long essay. So you can do it too. It's thought-provoking and hence you will pause once in a while to process. That probably takes more time than reading.

It's probably that one book where I wanted to bookmark everything. Each paragraph is very quotable. No wonder from Gandhi to King every one has quoted it. It's a must read for those who believe conscience is bigger than law. Did I say it's in public domain?

Here are some of my very favorite quotes.

The only obligation which I have a right to assume is to do at any time what I think right.

Law never made men a whit more just; and, by means of their respect for it, even the well-disposed are daily made the agents of injustice.

A very few— as heroes, patriots, martyrs, reformers in the great sense, and men— serve the state with their consciences also, and so necessarily resist it for the most part; and they are commonly treated as enemies by it.

Even voting for the right is doing nothing for it. It is only expressing to men feebly your desire that it should prevail. A wise man will not leave the right to the mercy of chance, nor wish it to prevail through the power of the majority.

Unjust laws exist: shall we be content to obey them, or shall we endeavor to amend them, and obey them until we have succeeded, or shall we transgress them at once?

Why does it not encourage its citizens to be on the alert to point out its faults, and do better than it would have them? Why does it always crucify Christ, and excommunicate Copernicus and Luther, and pronounce Washington and Franklin rebels?

if ten men whom I could name— if ten honest men only— ay, if one HONEST man, in this State of Massachusetts, ceasing to hold slaves, were actually to withdraw from this copartnership, and be locked up in the county jail therefor, it would be the abolition of slavery in America.

For it matters not how small the beginning may seem to be: what is once well done is done foreve

If a thousand men were not to pay their tax-bills this year, that would not be a violent and bloody measure, as it would be to pay them, and enable the State to commit violence and shed innocent blood. This is, in fact, the definition of a peaceable revolution, if any such is possible.

You must hire or squat somewhere, and raise but a small crop, and eat that soon. You must live within yourself, and depend upon yourself always tucked up and ready for a start, and not have many affairs.

Thus the State never intentionally confronts a man's sense, intellectual or moral, but only his body, his senses. It is not armed with superior wit or honesty, but with superior physical strength. I was not born to be forced. I will breathe after my own fashion. Let us see who is the strongest. What force has a multitude?

Is a democracy, such as we know it, the last improvement possible in government? Is it not possible to take a step further towards recognizing and organizing the rights of man? There will never be a really free and enlightened State until the State comes to recognize the individual as a higher and independent power, from which all its own power and authority are derived, and treats him accordingly.

I please myself with imagining a State at least which can afford to be just to all men, and to treat the individual with respect as a neighbor; which even would not think it inconsistent with its own repose if a few were to live aloof from it, not meddling with it, nor embraced by it, who fulfilled all the duties of neighbors and fellow-men. A State which bore this kind of fruit, and suffered it to drop off as fast as it ripened, would prepare the way for a still more perfect and glorious State, which also I have imagined, but not yet anywhere seen.