Book: Scenes in the life of Harriet Tubman 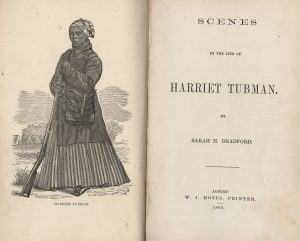 cenes in the life of Harriet Tubman

Harriet Tubman also called Moses by her people for leading people from slavery to freedom literally. She was born into slavery, she escaped it by all alone walking through the night, with just north star as reference. She crossed into Pennsylvania with the help of other Underground Railroad1 conductors.

But most existing and difficult part of her life as Moses had just started. She did odd jobs and saved enough money to go back and lead her niece (other family members) to freedom. It was dangerous to go back but she did it again to lead her brothers to liberty. She repeated this dozen or more times with the help of abolitionists. Probably one of her last trip to Maryland was to free her old parents. Because of all this, abolitionist William Lloyd Garrison named her "Moses"2.

Faith was huge in her life. She often had visions and dreams3. She talks about her conversations with god in the book. She believed god accompanied her every time she went to south and kept her group safe. But she was not blind, she carried a revolver and was never scared of using it. Also apparently she threatened to shoot any escaped slave who tried to turn back while on the journey for the safety of rest of the group. She couldn't read but was very smart, bold, had good connections and common sense. Meanwhile slaveholders were searching for a white abolitionist who was enticing their slaves away and causing them huge loses. Best part is despite all the efforts of the southern slaveholders, she was never captured, and neither were the fugitives she guided. She is truly a rock star.

In 1869 Sarah H. Bradford, historian and american writer wrote an authorized biography called Scenes in the Life of Harriet Tubman to raise money for her. It talks about her early life being a slave and her escape. It also talks about how and why she went back again and again to lead so many out of slavery. It's a must read and is available on archive.org. Thank you Anu for suggesting Harriet Tubman.

Some of my favorite paragraphs from the book:

The scars are still plainly visible where the whip cut into the flesh. Perhaps her mistress was preparing her, though she did not know it then, by this enforced habit of wakefulness, for the many long nights of travel, when she was the leader and guide of the weary and hunted ones who were escaping from bondage.

She came to Philadelphia, and worked in hotels, in club houses, and afterwards at Cape May. Whenever she had raised money enough to pay expenses, she would make her way back, hide herself, and in various ways give notice to those who were ready to strike for freedom. When her party was made up, they would start always on Saturday night, because advertisements could not be sent out on Sunday, which gave them one day in advance.

In December, 1850, she had visited Baltimore and brought away her sister and two children, who had come up from Cambridge in a boat, under charge of her sister's husband, a free black. A few months after she had brought away her brother and two other men, but it was not till the fall of 1851 that she found her husband and learned of his infidelity. She did not give way to rage or grief, but collected a party of fugitives and brought them safely to Philadelphia. In December of the same year, she returned, and led out a party of eleven, among them her brother and his wife. With these she journeyed to Canada, and there spent the winter, for this was after the enforcement of Mason's Fugitive Slave Bill in Philadelphia and Boston, and there was no safety except "under the paw of the British Lion," as she quaintly said. But the first winter was terribly severe for these poor runaways. They earned their bread by chopping wood in the snows of a Canadian forest; they were frost-bitten, hungry, and naked. Harriet was their good angel. She kept house for her brother, and the poor creatures boarded with her. She worked for them., begged for them, prayed for them, with the strange familiarity of communion with God which seems natural to these people, and carried them by the help of God through the hard winter.

A black woman was, relatively to the black man, the more delicate subject for the whip; something more sensitive to the shame of stripping, more liable to terror, and of rather softer fiber; so that the lash went deeper both into soul and sense than in the case of her sable brother.

But the Southern mistress was a domestic devil with horns and claws; selfish, insolent, accustomed to be waited on for everything. She grew up with the instinct of tyranny—to punish violently the least neglect or disobedience in her servants. The variable -temper of girlhood, not ugly unless thwarted, became in the "Southern matron" a chronic fury. She was her own " overseer," and, like that out-door functionary, had her own scepter, which she did not bear in vain. The raw-hide lay upon the shelf within easy reach, and her arm was vigorous with exercise. The breaking of a plate, the spilling of a cup, the misplacing of a pin in her dress, or any other misadventure in the chapter of accidents, was promptly illustrated with numerous cuts. The lash well laid on the shoulders of a black fernme-de-chambre, or screaming child, was an agreeable titillation of the nervous sensibilities of the languid Creole; a headache, or a heartache, transferred itself through the medium of the rawhide to the back of Phillis or Araminta.

They no doubt whipped sometimes, like Mr. Squeers, for the mere fun of the thing.