Once or twice when Subramanian has gotten around to leave the village for work. But Bhaskaran creates emotional situations where Subramanian has to return back to take care of him. Bhaskaran wants his son to be close to him.

In the meantime Subramanian gets an offer to work for a japanese robots company in Russia. He is very keen to take up this new opportunity. He hires a home nurse (maid?) to take care of his father. Makes all the arrangements and leaves to Russia. There he meets Hitomi and also learns about Android that can take care of elderly. He brings back one of them for his father. Assembles, configures and sets it up as his father’s help. His father, who is a privacy loving, stubborn person, is not very happy with it. In fact he hates it and avoids it as much as possible. 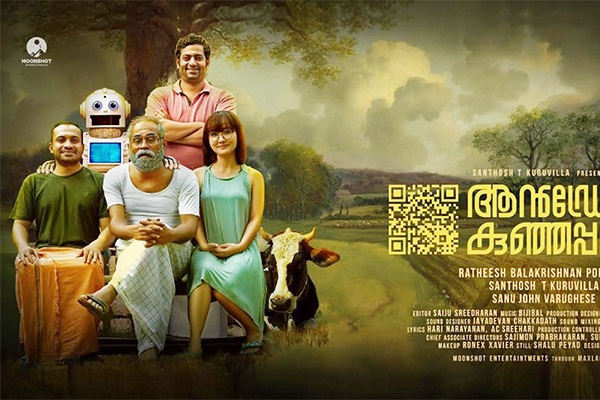 Subramanian leaves for Russia a couple of days later. It’s just Bhaskaran and android now. Curious neighbours give it a pet name Kunjappan. Kunjappan literally means father’s younger brother (In Kannada it would be Chikkaappa - Younger Father). It's also a name. So there are people named Kunjappan. From then on the story revolves around how Bhaskaran and Kunjappan get to know each other. The ending is not something I preferred. The climax goes the obvious way of Kunjappan trying to kill Subramanian. I think the writers missed a chance to write a good forward looking climax and fell for the obvious human, robot conflict with human winning. Anyway my interest is mainly in the second part of the movie where Bhaskaran and Kunjappan get to know each other. It's real, awkward, sarcastic and often very funny.

The part where Ramanathan starts using Kunjappan for reading news and keeping in touch with his love interest is endearing. Touch and voice make so much of the character building of Kunjappan. This is what I have seen children and elderly using while using technology. Touch screens, pinch and zoom, drag to refresh made the computation accessible to these two generations like no other things.

Voice has added to this anthropomorphizing of gadgets. Alexa, Virtual Assistant by Amazon uses voice UI. For a long time we technologists were struggling to talk to virtual assistants. I still do. That is because we think it should understand the way I speak. For the children at home, alexa is another child. They will talk to Alexa the way it understands. They don't have great expectations from AI. On the other hand, they think the kid can’t get it, so let me make it simple for the kid. They see more meaning in the conversation than productivity. It’s the same with Bhaskaran. He wants to have conversations with Kunjappan rather than the productivity the gadget brings. For him it's another kid. It’s safety is his duty. He even goes to a jyothishi (Astrologer) to figure its safety.

It’s a similar behaviour I see with kids. Someone gifted an Alexa to my sister a couple of months back. I was going to suggest that she discard it, just like what we did to our Google home, gifted by Google at I/O. But to my surprise her kids were already playing with it. They knew how to ask for a song, they knew how to ask for a piece of information. They were patient and playful with it. It didn't look strange to them that Alexa didn’t understand them everytime. They tried and tried again. It wasn’t about productivity, it was about conversation.

Daily conversation is exactly what elderly miss in India. Especially in states where elderly don't live with or closer to children as they live in a different city, state or country for work. There is also stigma attached to living in a retirement home. This makes elderly people live by themselves and they miss the daily banter the most. The Internet has helped a lot in the sense daily video calls with kids or grandkids is normal. But nothing like having a being to which you can talk to and ask for help if not anything. This is what Alexa could do. I use Alexa as a generic term for AI based voice assistants.

Will it be a game changer for elderly?

Can you build a business around conversations? My answer is yes. Especially if the conversations are meaningful. If you look at the Coffee houses1 in Britain or Coffee places in India, the service they sell is conversations. The number coffee connoisseurs who actually care about the coffee is tiny. They probably make their own coffee. Coffee houses are the places where you go to talk about news, politics or meet people. So if there are big coffee businesses selling real estate to have conversations, then it should be possible to sell smart conversationalists.

A generic smart conversationalist ( like Alexa) should be able to do that along with the ability to other assisted living facilities. IoT, I personally think, is more useful in reminding my parents of their medication, or reminding them about a birthday call they are supposed to make or allow them to make easy video calls than my ability to set reminders for the next meeting. And the flexibility and scalability of the internet should make it much easier than setting up a coffee house.

The biggest challenge here of course is privacy and safety. Once such smart conversationalists become part of our daily life, we will end up sharing everything. In the movie too you could see Bhaskaran refusing to share space initially but later ends up sharing everything. This is obvious. How we are going to handle it is the non obvious part. There are some solutions that are slowly appearing in the market that offer decentralized/edge computing based smart speakers. Mycroft is open source software that can run on a raspberry pi. It can be customized to specific uses and can run locally on the pi. Another option is Jasper which can run on raspberry pi and process things locally. Almond is a virtual assistant project by Stanford which can respond to both text and voice inputs. All these projects are a work in progress but show a lot of potential. They are at a place where Linux was at 10 years back. Given how fast the open source technologies are growing in the last decade. In couple of years they should be able to challenge Alexa or Home.