Book: Anarchism and Other Essays 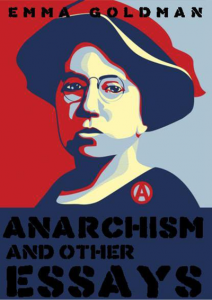 Anarchism and Other Essays

A web spiral on Labor day celebrations in India landed me on a Wikipedia page of a well known anarchist and feminist of her day. Though I was very uncomfortable 1 with some of her methods, her views on many things are very interesting and dare I say very relevant today. As a further reading I picked up this book Anarchism and Other Essays which outlines her ideas on anarchism, prisons, political violence, education, sex, women's rights, art etc.

Emma born in Russia 2, emigrated to the United States in 1885. She literally became the spokes person of anarchism influenced by Haymarket affair 3. She wrote and lectured about variety of issues, including prisons, atheism, freedom of speech, capitalism, marriage, free love, and homosexuality. The essays here deal with the same subjects in detail. She went to jail multiple times for various reasons including distributing information about birth control, inspiring persons not to register for the draft, etc. Later she was deported to Russia using Anarchist Exclusion Act. She died at the age of 70 in Toronto. There is so much to read about her life. Wikipedia is a good place to start.

I knew very little about anarchism before starting this book. This book worked as an introduction to anarchism for me. There are many solutions that anarchism offers that I agree and some that I don't. I wish there was a system which was a good mix of democracy and anarchism. My biggest issue with the essays here and generally anarchism4 is the acceptance of tactical use of violence. For me violence in any form is unacceptable. Once I accept that difference I was very comfortable with the rest of the ideas. Though it was published in 1910, the questions Emma raises are the same questions that people are still asking. It makes me wonder what happened in last hundred years.

The book is a must read for anyone who is interested in anarchism and related ideas. It's in Public domain. Book is full of quotable quotes, here are some of my favorites.

Anarchism asserts the possibility of an organization without discipline, fear, or punishment, and without the pressure of poverty: a new social organism which will make an end to the terrible struggle for the means of existence — the savage struggle which undermines the finest qualities in man, and ever widens the social abyss. In short, Anarchism strives towards a social organization which will establish well-being for all.

My lack of faith in the majority is dictated by my faith in the potentialities of the individual. Only when the latter becomes free to choose his associates for a common purpose, can we hope for order and harmony out of this world of chaos and inequality.

A thorough perusal of the history of human development will disclose two elements in bitter conflict with each other; elements that are only now beginning to be understood, not as foreign to each other, but as closely related and truly harmonious, if only placed in proper environment: the individual and social instincts. The individual and society have waged a relentless and bloody battle for ages, each striving for supremacy, because each was blind to the value and importance of the other. The individual and social instincts — the one a most potent factor for individual endeavor, for growth, aspiration, self-realization; the other an equally potent factor for mutual helpfulness and social well-being.

Religion! How it dominates man’s mind, how it humiliates and degrades his soul. God is everything, man is nothing, says religion. But out of that nothing God has created a kingdom so despotic, so tyrannical, so cruel, so terribly exacting that naught but gloom and tears and blood have ruled the world since gods began.

A natural law is that factor in man which asserts itself freely and spontaneously without any external force, in harmony with the requirements of nature. For instance, the demand for nutrition, for sex gratification, for light, air, and exercise, is a natural law. But its expression needs not the machinery of government, needs not the club, the gun, the handcuff, or the prison.

Anarchism, then, really stands for the liberation of the human mind from the dominion of religion; the liberation of the human body from the dominion of property; liberation from the shackles and restraint of government. Anarchism stands for a social order based on the free grouping of individuals for the purpose of producing real social wealth; an order that will guarantee to every human being free access to the earth and full enjoyment of the necessities of life, according to individual desires, tastes, and inclinations.

Even voting for the right thing is doing nothing for it. A wise man will not leave the right to the mercy of chance, nor wish it to prevail through the power of the majority.

Will it not lead to a revolution? Indeed, it will. No real social change has ever come about without a revolution. People are either not familiar with their history, or they have not yet learned that revolution is but thought carried into action.

In politics, naught but quantity counts. In proportion to its increase, however, principles, ideals, justice, and uprightness are completely swamped by the array of numbers. In the struggle for supremacy the various political parties outdo each other in trickery, deceit, cunning, and shady machinations, confident that the one who succeeds is sure to be hailed by the majority as the victor. That is the only god — Success. As to what expense, what terrible cost to character, is of no moment. We have not far to go in search of proof to verify this sad fact.

Today, as then, public opinion is the omnipresent tyrant; today, as then, the majority represents a mass of cowards, willing to accept him who mirrors its own soul and mind poverty.

What, then, is patriotism? “Patriotism, sir, is the last resort of scoundrels,” said Dr. Johnson. Leo Tolstoy, the greatest anti-patriot of our times, defines patriotism as the principle that will justify the training of wholesale murderers; a trade that requires better equipment for the exercise of man-killing than the making of such necessities of life as shoes, clothing, and houses; a trade that guarantees better returns and greater glory than that of the average workingman.

Society considers the sex experiences of a man as attributes of his general development, while similar experiences in the life of a woman are looked upon as a terrible calamity, a loss of honor and of all that is good and noble in a human being. This double standard of morality has played no little part in the creation and perpetuation of prostitution. It involves the keeping of the young in absolute ignorance on sex matters, which alleged “innocence,” together with an overwrought and stifled sex nature, helps to bring about a state of affairs that our Puritans are so anxious to avoid or prevent.

If love does not know how to give and take without restrictions, it is not love, but a transaction that never fails to lay stress on a plus and a minus.

The demand for equal rights in every vocation of life is just and fair; but, after all, the most vital right is the right to love and be loved. Indeed, if partial emancipation is to become a complete and true emancipation of woman, it will have to do away with the ridiculous notion that to be loved, to be sweetheart and mother, is synonymous with being slave or subordinate. It will have to do away with the absurd notion of the dualism of the sexes, or that man and woman represent two antagonistic worlds.

Free love? As if love is anything but free! Man has bought brains, but all the millions in the world have failed to buy love. Man has subdued bodies, but all the power on earth has been unable to subdue love. Man has conquered whole nations, but all his armies could not conquer love. Man has chained and fettered the spirit, but he has been utterly helpless before love. High on a throne, with all the splendor and pomp his gold can command, man is yet poor and desolate, if love passes him by. And if it stays, the poorest hovel is radiant with warmth, with life and color. Thus love has the magic power to make of a beggar a king. Yes, love is free; it can dwell in no other atmosphere. In freedom it gives itself unreservedly, abundantly, completely. All the laws on the statutes, all the courts in the universe, cannot tear it from the soil, once love has taken root. If, however, the soil is sterile, how can marriage make it bear fruit? It is like the last desperate struggle of fleeting life against death.