Book: An Atheist with Gandhi

An Atheist with Gandhi, by Gora

It's an interesting book to read. Written by Goparaju Ramachandra Rao nicknamed Gora about his experience of living at Sevagram and his conversations around atheism with Gandhi. It's interesting because Gandhi is a super-believer and Gora is an atheist.

Gora is an interesting personality. He along with his wife were the founders of Atheist Center, which is based on ideology of Gandhism and Atheism. They were like super couple, they watched solar eclipses1, lived in haunted houses, arranged public dinners (mixed caste and religion), conducted several inter-caste and inter-religious marriages, got their kids married to partners from then untouchable castes, organised a pork and beef parties. Of course they had to face a lot of difficulty from the society for this.

Gora's idea was that the Indian society is divided based on the caste and religion. Both caste and religion have their roots in theism. So by practicing atheism we could possibly unite the society. He had great respect for Gandhi and wanted to discuss his ideas with Gandhi. After multiple failures he got to spend time with Gandhi at Sevagram. This book even though written after Gandhi's death, is about his discussions with Gandhi at Sevagram.

It's a small book. So one can probably read it in a day but it has enough material to think about Gandhi and his PoV on God for weeks. I also love Gora's idea of atheism which is different from Godlessness. According to him, non-existence of super power, is just one aspect of atheism. Gora describes atheism as self-confidence and free will. The below conversation between Gandhi and him, is one of the best paragraphs from the book.

G: You say that atheism is positive?
I: Yes. In positive terms atheism means self-confidence and free will. Atheism is not negative in meaning though it is negative in form. Look at the words: non-co-operation, non-violence, ahimsa. They have positive connotations, though they are negative in form. To express an idea that is unfamiliar, we often use the negative of a negative. For instance 'fearlessness' for 'courage'. 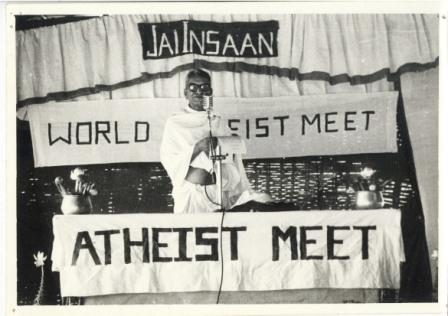 The book is available for free and in epub format. Its a must read. There are quite a few quotes which are very interesting.

I want atheism, so that man shall cease to depend on god and stand firmly on his own legs. In such a man a healthy social outlook will grow, because atheism finds no justification for the economic and social inequalities between man and man.

Bapuji listened to my long explanation patiently. Then he sat up in the bed and said slowly, "Yes, I see an ideal in your talk. I can neither say that my theism is right nor your atheism is wrong. We are seekers after truth. We change whenever we find ourselves in the wrong. I changed like that many times in my life. I see you are a worker. You are not a fanatic. You will change whenever you find yourself in the wrong. There is no harm as long as you are not fanatical. Whether you are in the right or I am in the right, results will prove. Then I may go your way or you may come my way; or both of us may go a third way. So go ahead with your work. I will help you, though your method is against mine."

I felt overwhelmed by his magnanimity. I requested, "You are encouraging me, Bapu. I want to be warned of the possible pitfalls in my way, so that I may benefit by your wisdom and experience and minimize my mistakes." Bapuji replied, "It is not a mistake to commit a mistake, for no one commits a mistake knowing it to be one. But it is a mistake not to correct the mistake after knowing it to be one. If you are afraid of committing a mistake, you are afraid of doing anything at all. You will correct your mistakes whenever you find them."

I said, "Perhaps, in the course of the marriage ceremony, you will invoke divine blessings for the couple, or say the words: 'in the name of God'. My daughter and my son-in-law are atheistically minded. They will not be parties to such implied belief in god. Gandhiji: In the case of your daughter's marriage, I will say 'in the name of Truth' instead of 'in the name of God'. Atheists also respect truth.