Where are the Indian language Maps?

It’s my hobby to ask Uber drivers which apps they use on a daily basis and what issues they generally face. It’s my opening into the way the world uses technology, which otherwise works perfectly fine for me and for People Like Us. For most drivers, besides network and connectivity issues, the main problem is language. Most of them are literate, can read and write in the local language very well, but face barriers when apps only offer an English user interface. Of course, some issues with the language can be solved with better UI design, great icons etc. And some can’t be solved without investing time and technology into them.

One such area, I found through my conversations, is maps.

Most drivers know how to align the maps and place themselves in the general direction. But the biggest issue they face is actually reading the content on the phone and pronouncing the names. This led me to researching maps in Indian languages. I dug deep, knowing that this issue has been solved, technically, outside India, in countries like Germany, China and Japan.

WHY DO WE NEED LOCAL LANGUAGE MAPS?

This diversity in languages brings complexity when as a country we are trying to move every aspect online.

Computing in Indian languages has been improving. As of today It’s straightforward and fairly easy to use Indian languages on desktops and the web due to increased use of Unicode (specially UTF8). User interfaces for Indian languages on phones and computers are also a more common feature today. Text entry on mobiles has become much easier than before, as all operating systems support Indian language keyboards.

But there are some areas in computing that have totally missed this bus. And web maps are one of them.

Digital maps form a big part of the information revolution. Maps are becoming a major interface for users to interact with information. Whether it’s an Ola driver navigating through the city, or someone ordering food, or local response teams managing natural disasters. The need for local language maps is obvious, and it is a must for digital equality.

Unfortunately, maps have been neglected when it comes to localization by governments and private bodies. Whether it’s a map of schools in your area, or routing information on an app on your phone — the geo information, as of now, is mostly in English. This needs to be in local languages if we want to bring down digital inequality and serve all citizens equally. This blog post by Reverie Language Technologies talks about this aspect in detail.

THE STATE OF LANGUAGE MAPS IN INDIA

There are not many players in the area of creating digital maps in India. The four major players I can think of are the Government of India (Survey of India, ISRO’s Bhuvan), MapMyIndia, Google and OpenStreetMaps (and digital mapping startups based on these).

I have not see any digital maps published by the Survey of India in Indian languages — or at least, their website doesn’t have any information regarding this. All I could find were printable wall maps, mostly in Hindi and English. I must add here, though, that the Political Map of India (on 1:4 M scale) is available in 12 Indian languages, including Hindi and English.

Bhuvan by ISRO was supposed to have been a made-in-India competitor of Google, but strangely enough it lags behind Google in language support. Even though Bhuvan 2D supports four languages in the UI, maps are limited to English only. This is a bummer because Bhuvan is probably the one used by the government to provide services to citizens. 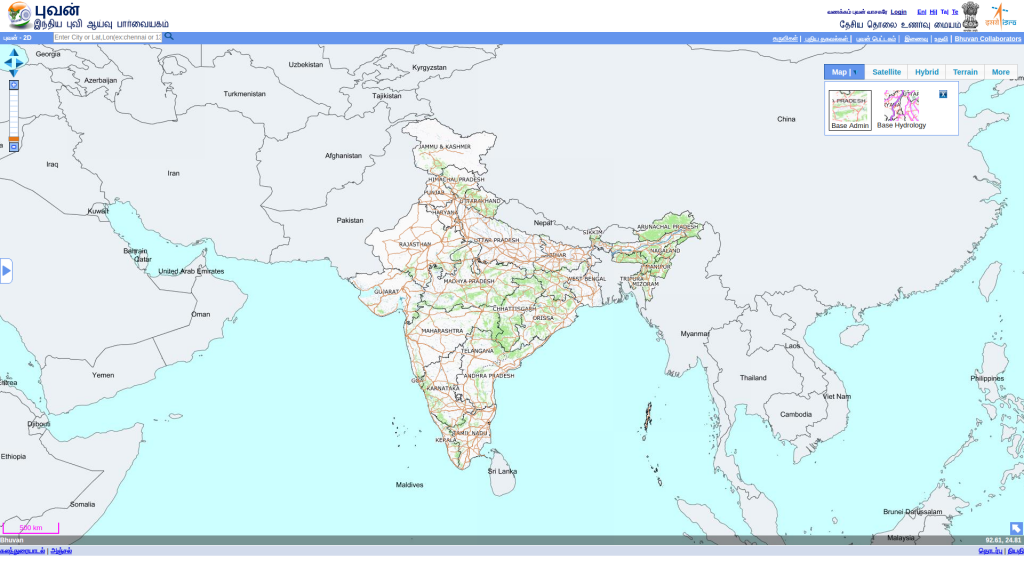 MapMyIndia, possibly the biggest Indian provider, has maps in English only. I looked through their whole website, and found that they have web maps, a Mobile Navigator App, map books, a hardware navigator, and APIs — and all mention only English as the language of maps. Though their mobile app has the turn-by-turn voice guidance in 11 languages, including English and Hindi, the local language support is limited to that.

Google is another major publisher of Indian maps. They have had a Hindi version since 2014, but while that may be useful for northern states, in most other states you get only English labels. Plus, even the Hindi version is nowhere near completion, even though the project started in 2014.

I couldn’t find Google Maps in any other Indian language.

OpenStreetMap is a free, editable map of the whole world. It’s continuously being built by volunteers and is available under an Open Database License. OpenStreetMap has been instrumental in helping humanitarian efforts around the world through its projects during natural and man-made disasters. In the last 10 years, OpenStreetMap has grown to become a major competitor in the GIS area. Though mapping in India started much later, the quality is very good.

When it comes to India languages on OpenStreetMaps, it’s still early days. Kannada is the top language with 40,000 nodes translated at the time of writing this article. The translation efforts started only in 2011 and has seen a small growth since then.

Interactive graph of history of Indian Language tag growth on OSM. Data from raifer.tech pulled using a script on Sep/18/2016.

But the positive thing is the growth in the last two years has been amazing. Also, the fact that Japanese and Chinese language communities have done major translation work gives me great hope that even in India, communities will respond and take up the job of translating these maps into their own languages.

SO HOW ARE WE GOING TO SOLVE THIS PROBLEM?

At this point, OpenStreetMap seems to be my only hope. The Indian OSM community, and the startup ecosystem around it, has responded very positively by handling maps efficiently during natural disasters. With the growth and need of Indian language map users, I think the community will respond quicker than government or any large private company.

How you can contribute:

It’s easy to translate maps on OpenStreetMap. Create an account on http://openstreetmap.org/ and login using their web ID. Click on ‘Edit’ and choose a node. Click on ‘Add translation’ on the left. Select your language and translate the value. A detailed how-to with screenshots is here.

This post first appeared on FactorDaily as Where are the local language maps for non-English speakers?. Edited by Shrabonti Bagchi. You can also track the status of Indic mapping on OpenStreetMap here.