One of the early cases of sexual harassment that I remember reading about is that of Phaneesh Murthy in 2002. When I joined Infosys in 2003 it was hot topic. There were discussions about how Infosys fired him; unhappiness about the compensation Infosys had to pay etc. I was mostly disgusted by the fact that he got hired by iGate and how much of Infosys's internal system had failed. A decade later he got sacked by the iGate for similar reasons.

In 2014, Andy Rubin, Android Creator, got hero's exit and $90M from Google. It's only in 2018 we learnt, how Google kept silent about sexual misconduct claim, allowing him to have a hero's exit through this NYT article. I am quoting couple of paragraphs from the article

SAN FRANCISCO — Google gave Andy Rubin, the creator of Android mobile software, a hero’s farewell when he left the company in October 2014.

“I want to wish Andy all the best with what’s next,” Larry Page, Google’s chief executive then, said in a public statement. “With Android he created something truly remarkable — with a billion-plus happy users.”

What Google did not make public was that an employee had accused Mr. Rubin of sexual misconduct. The woman, with whom Mr. Rubin had been having an extramarital relationship, said he coerced her into performing oral sex in a hotel room in 2013, according to two company executives with knowledge of the episode. Google investigated and concluded her claim was credible, said the people, who spoke on the condition that they not be named, citing confidentiality agreements. Mr. Rubin was notified, they said, and Mr. Page asked for his resignation. 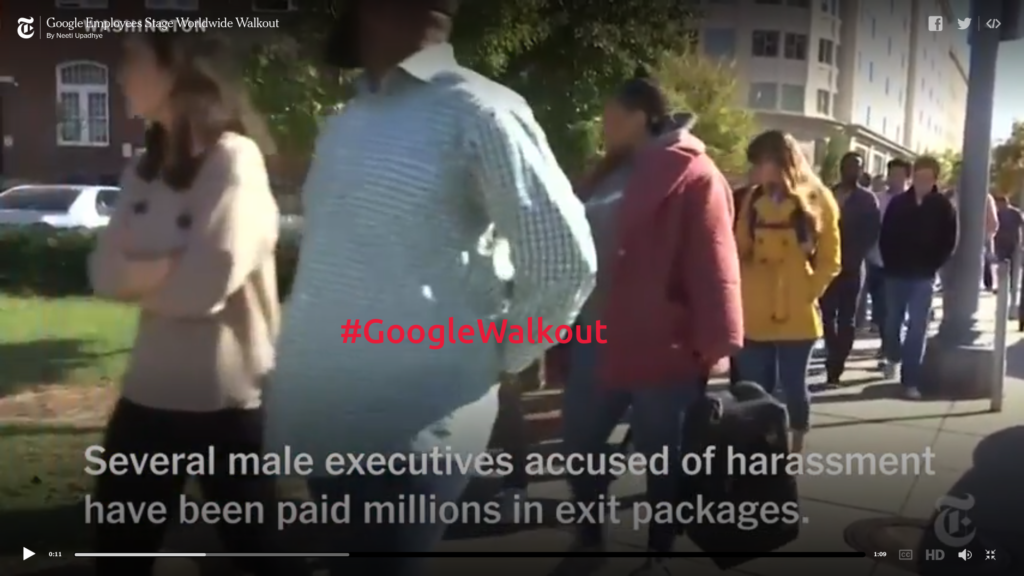 This November 1st, thousands of employees across the world walked off the job. It was a protest against how Google handled sexual misconduct claims. There were also demands from the employees. I thought the demands were fair. I thought Google's response will be positive. I am naive or overly positive! Listen to the Kara Swisher talking to some of the protesters. It doesn't give you any hope.

Google Walkouts is a big thing. I am surprised something like this has not happened in US or Indian IT industry before. Its fairly common in other industries in India. I have seen garment workers protesting/demanding for their rights.

I think Google Walkouts is a start. I think there will be more. It shows these shiny big tech/IT companies are just like any other average industry. Hence they should be treated like one. It's time they lose the fan following and become accountable. For me Google Walkouts was an eye opener.

Disclosure: All opinions expressed in this article are mine alone. I am a TVC. You can see all my associations here.